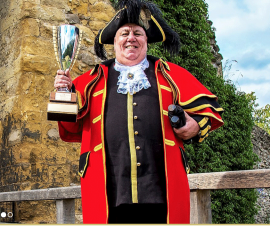 In 2020 David was still the World's Loudest Recorded Town Crier with a record set in 2013 at 114.8 decibels. He attracted a worldwide following after his appearance in the Universal Pictures Dad's Army Movie, led a Grand St George's Day Parade and met HRH Prince Charles in 2013.

Town Criers in England date back to 1066 when William the Conqueror introduced them as part of The Royal Court. Their role was to announce his laws and important events and news in all towns in England.

Modern day Criers have a key promotional role in assisting events and providing a heritage cultural link to those times.