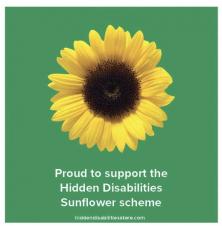 At the outset of Covid-19 it became obvious that some people needed help as they had unnoticeable reasons for being unable to social distance. The Hidden Disabilities Sunflower Scheme was launched in 2016 by a private company and soon became an international scheme, used at transport hubs and large supermarkets. In spring 2019 it was introduced quickly throughout Ryedale by the five towns, North Yorkshire County Council, Ryedale District Council, Sight Support Ryedale and Scarborough and Ryedale Carers Resource. Three shops in Helmsley were asked by the council to give out the lanyards and other accessories - the Co-op, Costcutters and Todds, and others have since publicised the sunflower lanyard including Helmsley Walled Garden and Porters. Helmsley Town Council is grateful for their support, particularly when Covid-19 has made working conditions for all so difficult. Councillor Carol Swift introduces the scheme in the video which was made by Luke of Ryedale Carers Resource.

A170 Traffic Speeds and complaints to the town council bit.ly/2TUbcnB